Opening: 10 September | 6 – 9 pm
Special opening hours: 11 & 12 September  | 11 am – 6 pm
Artificial intelligence (AI), Google, social media, data analysis and smartphones are our constant companions. The digital world with all its mechanisms has become an integral part of our lives.
Read more

More or less subtly and unconsciously, it increasingly influences our perception and our social behaviors. As daily users, we always leave a trail of data behind, increasingly in the form of photos that we take, send and share on various networks with our mobile phones. These developments are critically examined in the artwork by Lilly Lulay (*1985, Frankfurt am Main), who studied photography, sculpture, and media sociology in Germany and France.

Her raw material consists of photographs which she obtains online, at flea markets, or from acquaintances. Acting like an algorithm herself, she selects and extracts elements from these images by hand: cutting them out, highlighting them, or covering them up. Through this act of reduction, she makes visible what would previously have been lost in the wealth of information. In this way, new structures and patterns emerge as multi-layered paintings and collages that deal with the social, technical, and economic developments of the digital world in an analogue form.

For the first time, Galerie Klüser 2, in cooperation with Kuckei + Kuckei (Berlin), will provide an insight into Lilly Lulay’s multifaceted work. On the one hand, works from new series will be presented, such as Lesson I: The Algorithmic Gaze, in which individual parts of a photograph are revealed as an abstract composition through cut-outs in a panel-like plate. In the work Residual Data #2, countless fragments of photographic paper—a waste product of instant photo printing machines—unite to form an image noise that is both reminiscent of pre-digital times and a reference to today’s constant flood of images and the growing digital data waste. In De/Composed Narratives, too, photographic fragments are assembled into large collages that, on closer inspection, show outlines of people and individual objects between the white backs of photographs.

Examples of earlier works will also be on view, including works from the series Time Travellers—found photographs from the daily lives of now anonymous people whose identities stay concealed through a pixilation effect. In ABC, New Characters for an Experimental Sign Language, a transformative process of abstraction was performed. Lulay uses a scalpel to reduce pages from the 1983 anthology Les progrès de la technique—a format that has since become outmoded due to the arrival of search engines and online encyclopaedias—into minimalist compositions. On the other hand, the finely perforated image meshes from the series Our Writing Tools Take Part in The Forming of Our Thoughts were created using laser cutting, with icons forming the cutting lines.

Early Digital Tech, Artifacts From the Age of Acceleration is a whole series of works dedicated to technical devices of the digital age, including an old webcam, an iPod, a mobile phone, and a Tamagotchi—tools that are cultural relics of our time and now almost considered as cult objects. The series immortalises the short-lived devices with a needle and thread in time-consuming embroidery images.

The term ‘feature extraction’ describes the process of AI in which certain elements from a larger data set are filtered out. In a similar vein, Lilly Lulay sorts, analyses, and extracts in precise manual work. She examines photography between the poles of the phenomena and developments of the digital age, which are both constantly present and yet often unseen.

We would like to thank Neustart Kultur and Stiftung Kunstfonds for their support. 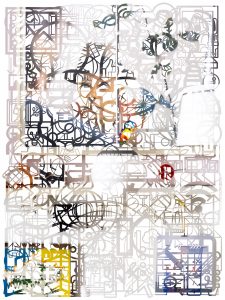 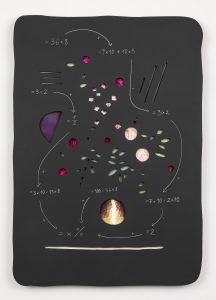 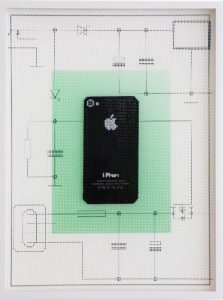 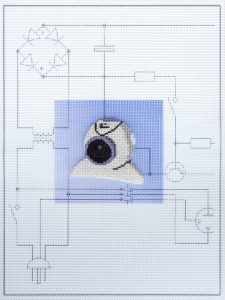 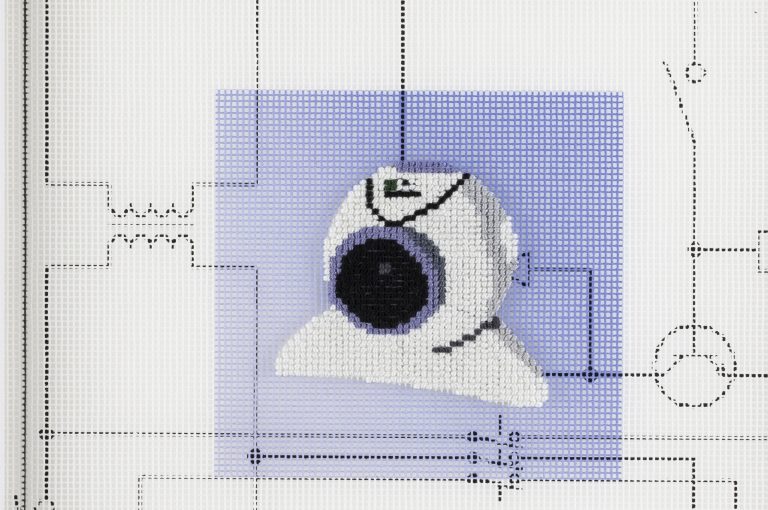 Born 1985 in Frankfurt, Lilly Lulay studied photography, sculpture and media sociology in Germany and France. Her works examine photography as a cultural tool that forms an integral part of daily life. Perfectly aware of todays overproduction of images Lulay uses own and other peoples photographs as “raw material”. Applying a variety of techniques, that range from laser cutting to embroidery, from installation to collage Lulay turns photographs into palpable objects. With her work she investigates on the influence that photographic media have (had) on social behavior and mechanisms of individual and collective perception.