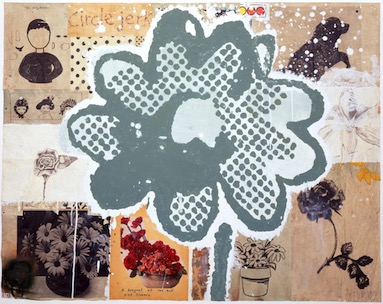 The American artist Donald Baechler was born in 1956 in Hartford, Connecticut. After studying at the Städelschule in Frankfurt, he moved to New York City in 1980. Soon he was part of the neo-expressionism movement together with artists like Jean-Michel Basquiat and Keith Haring, which had a lasting influence on the artistic style of his work. Up to the present day his work has been characterised by a symbolic and partly naïve pictorial world. Through a constantly growing collection of photos, news clippings, magazines, postcards, advertisement, cards and toys, the artist is generating an imagery that later finds its expression in outlines, monochromic colour fields and collage.