This year’s edition of VARIOUS OTHERS will feature paintings by Fabienne Verdier, photographs by Jean-Baptiste Huynh, and a lithograph by Kiki Smith in cooperation with Galerie Lelong & Co. from Paris. These will be shown alongside artistic positions of Galerie Klüser, including works by James Brown, Tony Cragg, Isca Greenfield-Sanders, Sean Scully, Constantin Luser, Jorinde Voigt and Andy Warhol. What they all have in common is the colour BLUE.

The colour BLUE has fascinated artists for centuries. Interestingly, the colour BLUE, which develops as a perceptual phenomenon from an infinite quantity of the tiniest molecules and is omnipresent in both the sky and the waters surrounding us, is simultaneously a colour charged with human emotions and longings.
The focus on the colour BLUE in the exhibition context leads to a multitude of cross-genre works using the colour in different ways as an aesthetic means to handle a pictorial theme.

Influenced by her studies of painting and calligraphy in China, Fabienne Verdier combines the technical and philosophical principles she learnt there with Western, abstract painting. An understanding of the world and the universe as one, and her subsequent belief in the vitality of all cosmic being forms the basis to an art presupposing an inner state of emptiness in order to combine with the forces of nature and their movement. Using partly oversized drawing and painting tools, she visualises the energies at work behind the external world.
Since the beginning of his self-taught career, Jean-Baptiste Huynh has also been investigating our relationship to infinity. Whether in his portraits, which emphasise natural beauty, or in his search for the clearest sky – for photographs of which he visits the world’s most famous observatories –, the artist’s aesthetic purism is totally suited to depicting the connections between the visible and the immaterial.
Jorinde Voigt sees sky blue as representing friendship. In her series “Blue Paradox”, pastel blue semicircles and opaque gold meet in various arrangements, providing visual snapshots of constantly mobile relationship constellations. In her large-format work “The Sum”, notations reminiscent of the movements of a baton extend across a deep ink-blue. Diametrical lines create golden colour fields that gleam between the high peaks, reminiscent of a mountain panorama.
Isca Greenfield-Sanders, meanwhile, adopts an extremely painterly and concrete approach to the sea as an idyllic place of longing, as a place of vastness, boundlessness and freedom.
In contrast, other artistic positions are presented that use colour as a tool to express or initiate subjective impressions, (spatial) perception, and emotions in an abstract way, such as Sean Scully, Natalia Załuska, Milen Till and James Brown. Here, BLUE becomes a carrier of meaning that can only be perceived more sensually.
Colour is used deliberately to create a break between reality and image in the figurative works of the exhibition, as well: the alienation experienced with Kiki Smith’s cat and the people depicted in Andy Warhol’s and David Godbold’s works using the colour BLUE point once more to the power of different shades of blue, whose mutability Constantin Luser reveals in his plate-glass painting through analogy with the element of water, as does Tony Cragg’s sculpture using the element of wood. 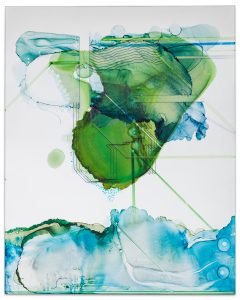 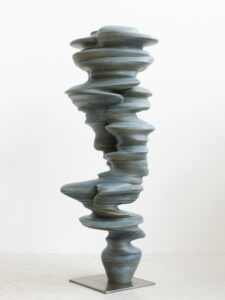 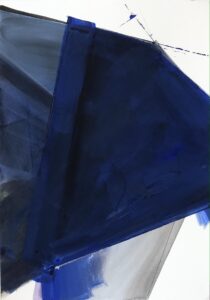 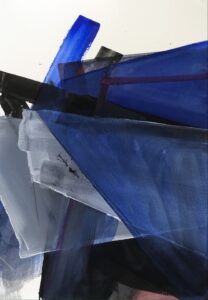 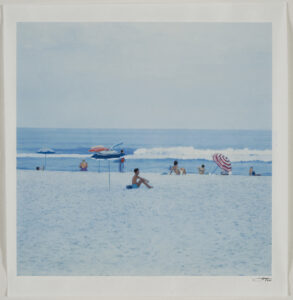 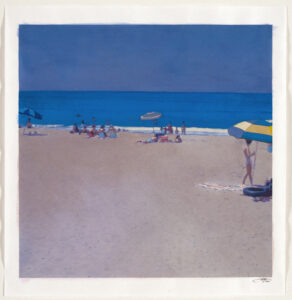 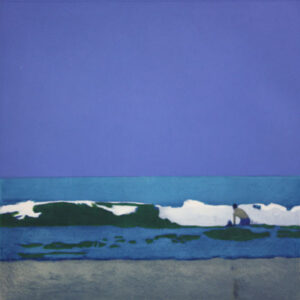 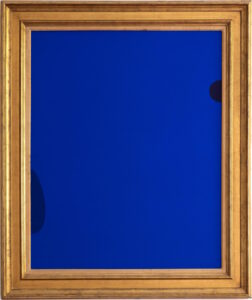