An important artist, gentleman and citizen of the world – James Brown – has tragically lost his life. Together with his wife Alexandra he died in February this year, in a car accident in Mexico. The tragic death of the two has affected us deeply and we would like to remember James Brown with respect and gratitude by means of this impromptu exhibition.
Read more

Showing paintings and graphic works from the 1980s to the 2000s, we are offering an insight into the artist’s diverse and extensive oeuvre, to which we have dedicated several exhibitions since the mid-1980s. Among others, the gallery organized the large retrospective show “Works on Paper 1981-1998” with an accompanying catalogue. The exhibition was shown in 1999, in five different museums in Europe including the Musée d’Art Moderne (Céret), the Städtische Kunstsammlungen (Chemnitz) and the Galleria d’Arte Moderna, Villa delle Rose (Bologna).

Influenced by so-called “primitive art” and its reception in classical modernism, Brown’s works combine archaic symbols from the ritual context of the indigenous peoples of Africa and America with abstract and concrete forms. The symbols and figures are highly stylized and remind us of masks or shadowy outlines, so lending the works a mystical quality.
Brown’s works are also characterized by the use of unusual materials such as special types of paper, fabrics, photographs, various found objects, and antique frames, which are combined in his paper works with traditional techniques such as pastel chalks, inks, and oil painting. The individual elements are put together to form precisely composed, haptically perceptible, and poetic collages. Brown dedicated himself to his graphic artworks with the same precision and passion, and added individually collaged elements to many of the printed sheets.
Born in California in 1951, the artist first studied painting and printmaking at Immaculate Heart College in Hollywood. In the 70s he moved to Paris to study at the École des Beaux-Arts. During his time in France, he was influenced by the collections of the ethnological and natural history museums there, but also by the work of French painters such as Henri Matisse, Pablo Picasso and Jean Dubuffet, who were exploring “primitivism”. A few years later Brown moved to New York City, where he frequented the circle of Andy Warhol, Jean-Michel Basquiat and Keith Haring.
At the same time, Brown’s works were being shown in important gallery and museum exhibitions in Europe and the USA. In 1995 the artist moved to Mexico with his family, realizing various artistic projects in Oaxaca together with his wife. In 2000 he founded the Carpe Diem publishing house with her, which published artist books and editions by Kiki Smith, Jack Pierson and Dan McCleary, among others.
He kept his studio in Paris as a European base throughout his life.
Most recently, the artist’s work has dealt with the infinity of the cosmos and its planets. 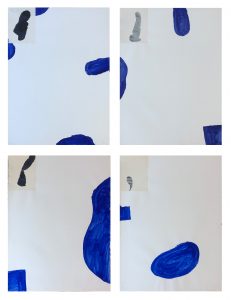