Words in another language can be mysterious, creating an invisible barrier, but they may also become the key to a new world. Music is one step ahead of verbal language – it is a universal language whose words and phrases can be understood everywhere. In his works, Gregor Hildebrandt (* 1974) has been using music in the form of analogue data carriers for over 20 years; cassettes and records become the central material and content components of many pieces.
Read more

Countless video or cassette tapes on canvas combine into images with calligraphic or floral motifs, or geometric patterns; deformed vinyl records stack into columns and walls. Sometimes, they also become the raw material of a homage to materials of our daily life, such as wood or textiles.
Gregor Hildebrandt devotes himself in many ways and forms to the cultural and everyday elements of the reality surrounding him. In this process, music becomes a connecting element and a medium of remembrance.

The exhibition is a composition of artworks that link different phases in the artist’s life and work. The thirteen beams with a wooden grain from the installation Ich habe Stimmen gehört resemble a section cut from a tree trunk. On closer inspection, however, the annual rings turn out to be cassette tapes, wound further and further around the reel. The wood motif has accompanied the artist for several years, beginning with the Baumstammschallplatte (2003), in which Hildebrandt takes up the similarity between the natural structures of a tree’s annual rings and the grooves of a record.
1-cent coins are sometimes hidden in the centre of the trunks – and by following the tape above the garden of the Academy of Fine Arts, the continuation of this copper rain can be found in the professor’s studio: a small coin lies on each knothole of the parquet floor. Symbolism and rituals of luck (like eyelashes) – elements of everyday traditions deeply rooted in society – are also recurring themes in Hildebrandt’s oeuvre.

In the series Geschirrhandtücher meines Vaters the colorful beginnings and ends of tapes, as well as recorded tapes join to form check and herringbone patterns from kitchen towels, reminiscent in their forms of constructivist works by Mondrian or Konrad Lueg’s Pattern Paintings. Like his father’s dish towel collection, the round record mosaic makes also a reference to his hometown Sulzbach, as it is composed according to the tracery of a church window in the local cemetery chapel.

Only two months ago, during a performance at Ludwig Beck as part of the Munich initiative VARIOUS OTHERS, the positive image evolved of the rip-off painting Die Notwendigkeit der Notwendigkeit (The Necessity of Necessity). In the exhibition, the counterpart – which is always part of the work process – can now be seen for the first time.

Regardless of their appearance, all these works have one thing in common: their voice has fallen silent, preserved on unrolled magnetic tapes and pressed plastic. And yet it is still present and unfolds an invisible additional dimension, to which Hildebrandt – in a similar way to Ingmar Bergman’s film character Ester – occasionally leaves clues for us to decipher. 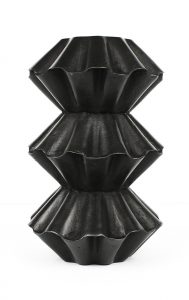 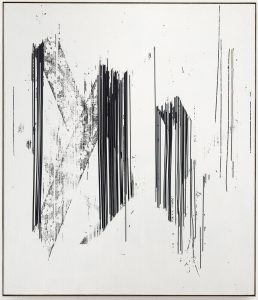 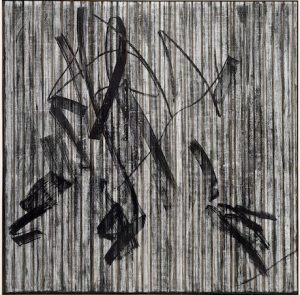 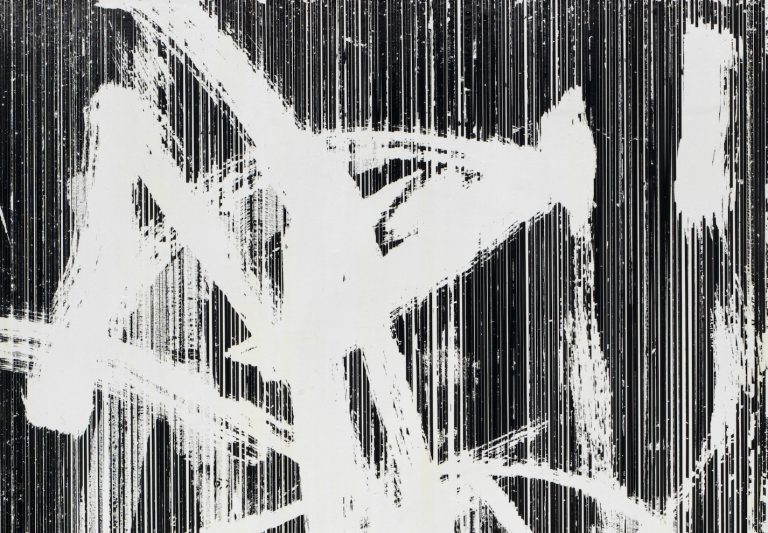 Gregor Hildebrandt was born in 1974 in Bad Homburg v. d. Höhe, Germany. Working mainly with analogue sound storage mediums, the artist creates sculptures, installations and paintings with materials such as compression molded vinyl, audiotapes on canvas or cassette shells. With their musical history they are adding another invisible dimension to the minimalist works.