In the exhibition ‘UN POCO’ we are presenting sculptural and painterly works from new series by the Austrian artist Constantin Luser (*1976, Graz).
Read more

One thread running through Luser’s work is the line, as well as a play with space, volume and interim spaces; his ultimate intention is to release the line from two-dimensionality and translate it into space. The sculptures made of brass wire and the glass paintings on mirrors, which can be seen at Galerie Klüser 2, both visualize Luser’s graphic world of ideas and the development of his works away from the surface into space.

Luser regards drawing as the “most original medium” of art, and it always provides the starting point for his works.
In his works on paper, the development into the spatial occurs through an almost illusionary use of several parallel lines, whereas in his sculptural works, the spatial drawing marks the launch of the creative process. Later executed in shaped brass wire, they can be understood as the line’s ultimate translation, so to speak, into space.

Their omnidirectional nature means that the wire structures floating freely in space offer innumerable possible interpretations, whereby the main focus is on the work’s communication with the surrounding space and the viewer.
As opposed to works from earlier exhibitions, these wire structures are supplemented by black lacquered pedestals. The contrast between the dynamic wire structures and the static pedestals, which are presented floating entirely above the floor, challenges the observer’s viewing habits and adds a further distinction to the sculpture.

In addition to the sculptural works, in this exhibition we are also presenting mirror glass paintings by Constantin Luser – a new medium in the artist’s multifaceted oeuvre.
The paint is applied to the mirror surfaces in flowing organic forms, making it reminiscent of water or clouds – elements of nature that are constantly changing. Likewise, these works by Luser are in a constant state of flux, since every spatial change and reflection on the surface creates a new image, leading to a permanent interaction between the work, the space, and the viewer.

The works being presented invite the viewers to look more closely and to become immersed in the artworks via their spatial imagination and perception, so exploring the interplay between the moving elements and constants of their own environment. 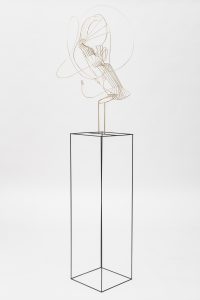 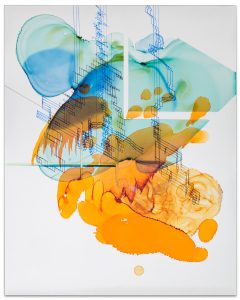 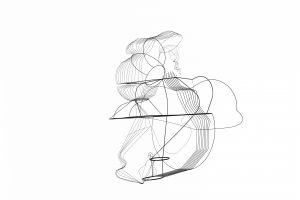 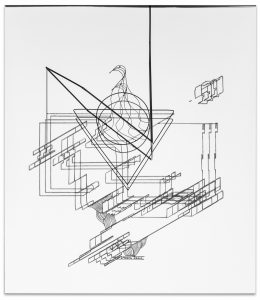 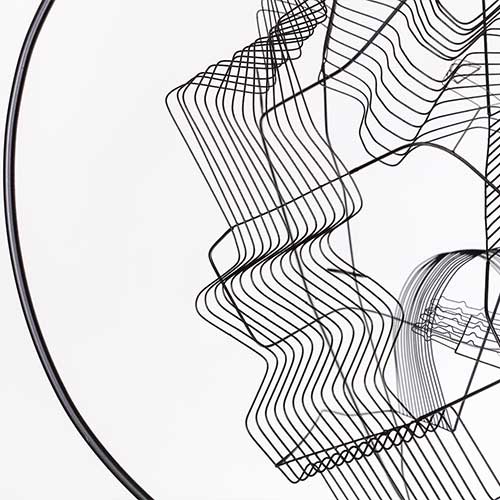 Constantin Luser was born in 1976 in Graz. After completing his studies in conceptual art and visual media in Vienna, the artist devoted himself to drawing. According to him, drawing constitutes the original medium of art. With precise lines Luser creates a fantastic pictorial world extracted from his sketchbook. He links and integrates the more or less bizarre objects, forms and figures into a complex system of lines. With his ‚spatial drawings’, sculptures made of brass wire, the artist goes one step further by moving the lines into the third dimension.